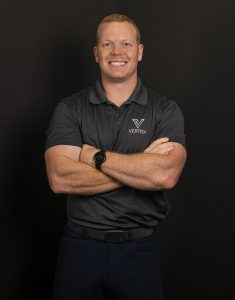 Josh grew up in Cincinnati, Ohio and completed his undergraduate work at the University of Dayton in 2012, graduating with a B.S. in Business Administration. He moved to Columbia, SC in 2013 to begin graduate school at the University of South Carolina, earning a M.S. in Exercise Science in 2015 and his Doctor of Physical Therapy in 2019. He is a Certified Strength and Conditioning Specialist through the NSCA, an OPEX coach and a CrossFit Level 2 trainer.

Josh began his career in the strength and conditioning field and has experience working in multiple settings. He has worked with the athletes at USC, NFL players, Olympic athletes, elite level CrossFitters, weightlifters, powerlifters and everyone in between. As a former college baseball player, Josh enjoys working with throwers and other overhead athletes as they work to get back to their sport. He also enjoys working with functional fitness athletes and has coached Crossfitters to the CrossFit Games, regionals and sanctional events.

In his spare time, Josh enjoys spending time with his wife and their two dogs, traveling the country to teach continuing education courses, and training and competing in CrossFit and weightlifting.

Have questions or would like to schedule an appointment?